M is for Missing 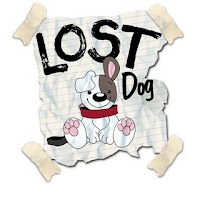 Hi Everyone,
Along with this blog, I also have another titled Miss B Travels. It is a Travel Blog for my kindergarten's Miss Bindergarten Doll.
She has been traveling the country with her travel journal and books, visiting other kindergarten classrooms across the country.
It's been a great project for my class teaching them a little big about the geography of the country they live in.
Each week I pull up Miss B's blog in the computer lab as we keep track of her travels.
But Miss B has gone missing and I'm trying to track her down.

Her last known whereabouts were in Georgia and she was headed toward Citronelle, Alabama, but I'm not sure she arrived.
I'm hoping by posting this here, she will somehow be located. If anyone knows Miss K in Citronelle, can you please let her know we are looking for our Miss B!

T is for Tummy Trouble

Six little ones stayed home from school today. So my little group of 17, was down to just 11.

Now you would think a kindergarten teacher would welcome the quiet.
Yes, it was easier to shuffle them all to our holiday concert, and line them up on their little rows on the stage, and yes I had twelve less shoes to tie, and 6 less jackets to zip.

But, the lessons I had planned, now need to wait until tomorrow because I don't want 6 kids to miss too much.  So I had to wing it a bit, pull some tricks  out of kindergarten sleeve to keep my 11 happy and busy.

We spent the day singing, playing, building and making snowflakes and I threw in an extra story.  The mood was lighter, not quite as busy, a little more relaxed and still fun. We really did have a good time with no real schedule to follow. But somehow it just didn't seem right.

The fact of the matter is those six little personalities were missed!

Each one of them has become so important to the dynamic of our classroom.
They all contribute, each in their own little way, and when one of them is noticeably absent it just doesn't feel right.

I hope with plenty of rest and some Mommy and Daddy love, they'll be back in the morning because we just aren't complete without them!
Posted by Lisa at 7:48 PM 2 comments:

G is for Gingerbread

Last week was gingerbread week in our classroom. The theme provided us with a fun week of activities that helped the transition between Thanksgiving and Christmas.

There are so many different versions of the classic Gingerbread Man that we never lacked for enough literature!
We started the unit with The Gingerbread Man illustrated by Karen Schmidt. 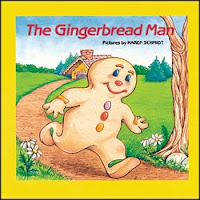 It's a classic take on a classic story with the Gingerbread Man meeting a very sticky end on the end of a fox's nose!
During literacy centers, I designed a glyph in which they created a gingerbread man of their own.
We added a little glue and some sparkles then hung them up to dry. 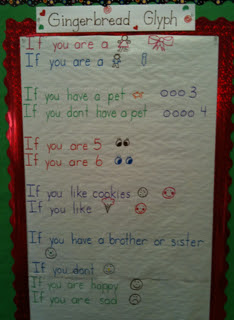 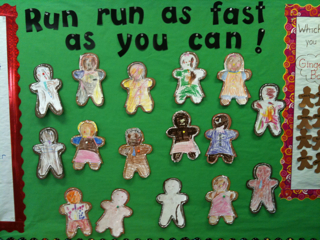 One of the centers I designated as "The bakery." I put out gingerbread boy and girl cookie cutters and ginger and cinnamon scented play-do, which I made using a basic play-do recipe with lots and lots of spices mixed in. It smelled good enough to eat, but came with a stern warning not to!
I provided googly eyes and beads for decorations. They had a great time creating their Ginger people and were pretty impressed that their hands smelled like Christmas for the rest of the day.
About mid-week I read The Gingerbread Baby by Jan Brett. 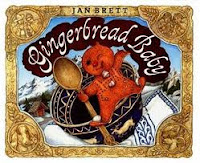 I love this story, mostly because it ends happily with the little Gingerbread Baby living happily in his own little gingerbread house and not in a fox's belly.

Later, I created a graph in which I asked, "Which Gingerbread Story did you like best?
I gave each child a small gingerbread cut out with their name on it and asked them to place their gingerperson on the graph.
Gingerbread Baby won by a landslide! 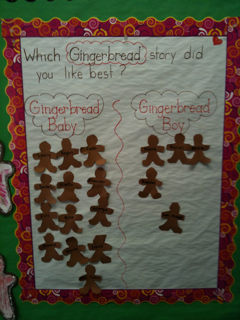 We finished the unit by creating our own gingerbread houses.
The day before I collected empty milk cartons from the lunch room and rinsed them well.
We used cinnamon graham crackers for the sides. A little glob of frosting is just enough to glue the graham crackers to the milk carton. 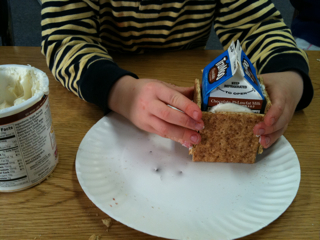 We used canned frosting, but next time I will definitely make my own. Home made is a little big stiffer and stickier, where the canned stuff tends to be a little too slippery.
It did eventually work with a little perseverance, but it was a little frustrating for little fingers.
I provided, star mints, gumdrops and red cinnamon hearts to stick to the graham crackers. 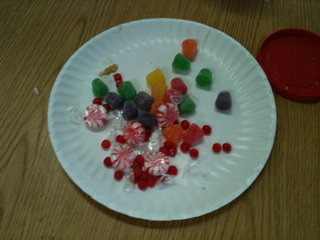 The most difficult part of this was keeping their frosting covered fingers out of their mouths! 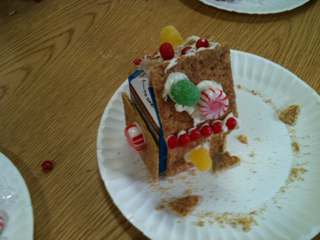 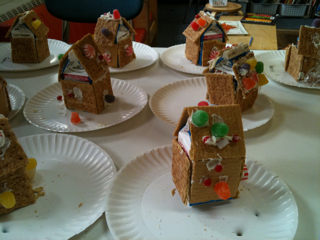 The kids were so proud of their sweet creations...and so was I!
Posted by Lisa at 4:15 AM 2 comments:

The weeks after Thanksgiving and before Christmas are always a little tough to fill. The kids already have sugar plumbs dancing in their heads, so it's important to keep them busy and engaged to cut down on the chaos.

Away went the Thanksgiving and fall books and out came the Chanukah and Christmas books. The fall leaves on bulletin boards and the playhouse have been carefully packed away, and little by little the evergreens, dreidels, and Christmas lights are making their appearance.

It's sometimes a struggle to come up with activities in order to make a smooth transition from one season, holiday, or big event to another. So we kindergarten teachers have to be kind of creative.

Last week was gingerbread week, (more of that coming in my next post), this week we are talking about all things "Reindeer"! 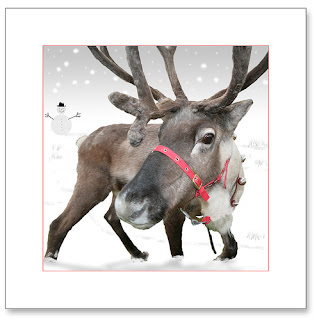 I started my lesson with a web. I wrote the word Reindeer in the center, then went about my business trying to assess their current reindeer knowledge, which by the way exceeded my expectations as you will soon discover. I kid you not!

Me: Does anyone know any real facts about reindeer? (hands shoot up)

Darcy: I do Mrs. Collins, I know that Reindeer evolved from horses, they are horse cousins. Way back millions of years ago in the Jurassic period, Reindeer had 5 toes, but because they evolved now they only have two toes.

Me: Speechless, Jaw on floor.

Maggie: I know another reindeer fact Mrs. Collins. I know that reindeer leave a scent trail on trees and bushes so they can mark their territory and other reindeer can find them. And, I know they have iron in their noses so they can tune in to the earth's magnetic field and find their way if they get lost out on the tundra.

Me: Okay, Amanda go ahead. 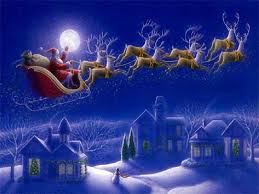 Lisa
I'm Lisa, mom, wife, kindergarten teacher. I love my job and work with some of the best teachers on the planet. I can't imagine doing anything else!

K is for Kindergarten

Promote Your Page Too 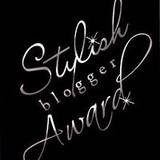 B is for Big Yellow Bus

O is for Organized

Everything you read here is my own original work. If I post an idea I've gotten from someone else I'm sure to give credit and ask that you do the same.
I'm always willing to share, please just add my name and blog link to your posting.

D is for Discount